Between the FitDog Friday and the Show Off Your Dog’s Waistline blog hops, pet bloggers have been working hard to raise awareness on dog’s health and fitness.

Our dogs have always been pretty fit and healthy….we work hard to watch their weight and be sure that if they start to gain we get it under control quickly. With that in mind, both hubby and I have noticed lately that our beagle Cricket is a little on the heavy side.  It is normal for her to get a little chunkier in the winter, when the dogs exercise less.  Cricket has always been very slim, and tended towards the “too slim” side when she was younger and much more active.  If she puts on a little weight in the winter, it quickly comes off when they start exercising more.  But, like her parents, Cricket is getting older and the weight may not come off as easy.  Most of her exercise comes from ball playing, and we mostly would leave the length of their game to them, in fact, we would usually put an end to the games because we’d get tired of it before the dogs did.  Now that they are all over 8 years old, they are slowing down some, and sometimes choose to end the games sooner.

I want to show some photos of Cricket I just took yesterday to see what you think.  I weighed her on the scale yesterday and she weighed 26 lbs.  She weighed 25.7 at her last vet appointment back in January.  She has always been under 25 lbs, and at her appointments the last two years her weight was 23.6.

Here is a chart to see where your pet falls:

I think Cricket falls between #3 and #4.  She has a little bit of an indent, but she also has a little sag below.  Also, I can’t really feel her ribs either, especially not compared to the other dogs.  For comparison here are some older photos of her:

Can you see the difference?  I am certainly not saying that Cricket is extremely overweight, but we try to get  this under control before it gets out of control (we use the same theory on ourselves).  Especially where she is getting older, and she is a beagle (beagles tend to be overweight as they will eat as much as  you are willing to feed them).  Beagles know how to use their cuteness to get what they want, which really is just endless treats if they had their way!

My goal is to make sure she gets  enough exercise:  maybe adding some more walks to her routine, especially when it gets hotter and they don’t play quite as much ball.  Or make sure we have some ball games early in the morning when it’s cool, on the days that we can.   Of course we have cut back a little bit on her meal portions, and she also gets smaller portions of treats.  When she is at a healthy weight, she has often gotten around the same amount of food and treats as Kobi (who weighs about 35 lbs), because she has always been that much more active.

I hope that within a month or so we can get her back down to 23.5 – 24 pounds.  Maybe 2 pounds doesn’t sound like much, but on a dog her size I think it makes a big difference.   What do you think – are we on the right track here, or are we being too hard on her?

I am also going to read all the other FitDog Friday blog posts to learn other ways we can help Cricket get back in tip top shape.  I will report back in a month and let you know how she’s doing!

We  are joining the Waistline Campaign blog hop.  Click on the photo below to read more. 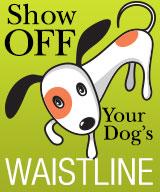 This post is also part of the FitDog Friday blog hop hosted by SlimDoggy, Peggy’s Pet Place, and To Dog With Love.  Please follow the links below to learn more about health and fitness for your pets!

This site uses Akismet to reduce spam. Learn how your comment data is processed.

Wag 'n Woof Pets is a participant in the Amazon Services LLC Associates Program, an affiliate advertising program designed to provide a means for sites to earn advertising fees by advertising and linking to amazon.com. A * indicates an affiliate link.